If You were Diagnosed With Cancer After Exposure to Firefighting Foam, Lawyers at Emerson Firm Can Help!

Aqueous Film-Forming Foam (AFFF) has been widely used for decades to extinguish fuel-based fires. However, chemicals contained in the fire fighting foam may increase the risk of testicular cancer, kidney cancer, pancreatic cancer and other diseases.

Request a free case evaluation to find out if you or a loved one may be entitled to receive firefighting foam settlement benefits, including:

No Fees or Expenses Unless a Recovery Is Obtained!

The product liability lawyers at Emerson Firm provide free consultations for individuals throughout the United States who have been diagnosed with cancer that may have been caused by side effects of chemicals in AFFF (Aqueous Film-Forming Foam).

This fire suppression foam has been used for decades at military bases, airports and by civilian firefighting organizations during training exercises and in response to fuel-based fires, which can not be controlled by water alone. However, firefighters were not warned about dangerous chemicals that are known to accumulate in the body and may cause a risk of cancer or other disease.

Financial compensation may be available through a firefighting foam lawsuit for individuals diagnosed with:

All fire foam cancer cases are pursued by our lawyers under a contingency fee agreement, which means that there are never any out-of-pocket costs to hire our law firm and we only receive an attorney fee or expenses if a settlement or recovery is obtained for you and your family.

AFFF foams were first introduced in the 1960s and designed specifically for use on petroleum-based fires where traditional water suppression alone would be ineffective and inadvisable. They have been in use for decades by both military and civilian firefighters in response to Class B fires. 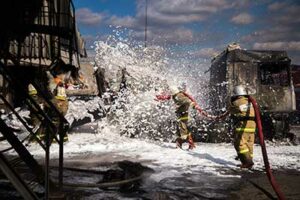 These fire foam chemicals have been found to bind to proteins in the blood, as well as leach into drinking water supplies and into the soil. They are not biodegradable and are projected to take thousands of years to degrade, earning the nickname “forever chemicals”.

Prior to the use of PFAS in AFFF, the chemicals have not been widely found or detected in the human body. However, the fire foam chemicals are toxic and carcinogenic chemicals that have been linked to a number of health effects, including liver damage, thyroid disease, decreased fertility, high cholesterol, obesity, hormone suppression and cancer.

Manufacturers of AFFF foam knew or should have known for decades that PFAS chemicals may persist over long periods of time and accumulate in the body of firefighters and others who come into contact with the chemicals, yet warnings do not adequately disclose the unreasonable risk to human health from firefighting foam.

Cancer from Firefighting Foam May Have Been Prevented

PFAS chemicals in AFFF foam are known to persist over extremely long periods of time, accumulating in the body of individuals exposed, regardless of how small the contact. As a result, individuals may face long-term health risks after working as:

For decades, studies have found that exposure to PFAS can cause tumors in animals. As a result, scientific principals should have led manufacturers to recognize the potential link between AFFF foam and cancer in humans, since the precise mechanism of action was never confirmed in animal studies. However, despite the risk for firefighters, military and airport personnel, information and warnings have been withheld for decades.

AFFF was commercially introduced in the mid-1960s, and became widely used by firefighting organizations and at military bases.

By the end of the 1960s, animal toxicity testing found that exposure to PFAS chemicals resulted in adverse health effects among laboratory animals, including toxic side effects to testicles, liver, adrenals and other organs.

By the end of the 1970s, additional research found that the unique chemical structure may cause PFAS used in AFFF to bind to proteins in the blood of animals and humans exposed to the material, which can remain and persist over long periods of time. Although it was known that the AFFF chemicals may accumulate in the body and blood with each additional exposure, manufacturers continued to market and sell the firefighting foam without adequate warnings and precautions for firefighters.

By the 1980s, researchers had gone as far as to identify the mechanism of action which led to PFAS causing an increased cancer risk.

When regulatory agencies in the U.S., including the Environmental Protection Agency (EPA) raised concerns, many manufacturers reassured them there was no risk of adverse health effects or environmental damage; claims which have largely since been proven false.

By 2010, additional research and testing found multiple potential side effects among workers exposed to PFAS, such as increased cancer incidence, hormone changes, lipid changes and impacts to the thyroid and liver.

By the mid 2010s, an independent science panel determined that human exposure to only 0.05 parts per billion of one PFAS, PFOA, had probable links to kidney cancer, testicular cancer and other disease.

Companies responsible for cancer among firefighters and military personnel may include: 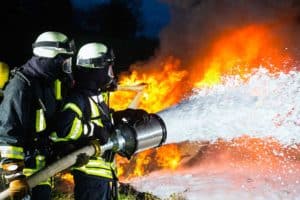 The lawyers at EmersonFirm are reviewing both individual AFFF cancer lawsuits and firefighting foam class action lawsuits for individuals and families throughout the United States. According to allegations presented in the litigation, manufacturers have:

No Fees or Expenses Unless You Receive a Firefighting Foam Settlement

All firefighting foam cancer cases are being investigated by our law firm on a contingency fee basis. There are never any out-of-pocket costs to hire our lawyers, and we receive no fees or expenses unless a recovery is obtained.

Protect your family and find out if you or a loved one may be entitled to a firefighting foam cancer settlement.